We'd like to wish a very happy New Year to all our valued clients. 2018 is special for us as it is our 10th year in business, and without our clients we'd look silly writing these newsletters every quarter.

Year in Review—The success of our 2017 predictions is a bit mixed, but we were spot on where it mattered. Our core prediction was for the market momentum that started with the Trump election to continue for the entirety of 2017. Returns for the year were stellar for equities of all types, and the manner that they were achieved was quite interesting as well. Despite the volatility that is perceived by many in politics, the markets had one of their least volatile years on record without recording a single negative monthly return. 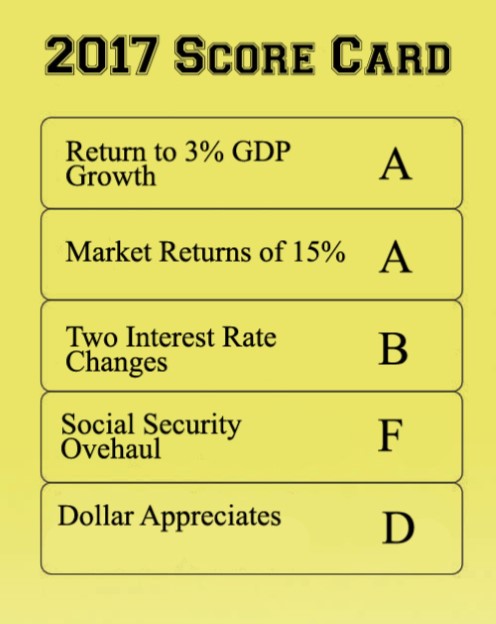 Our biggest miss for the year was a prediction that we'd see the first major overhaul in Social Security since the Reagan years. While we did manage to close out the year with a historic tax reform bill, Congress was especially careful to not touch anything Social Security related. This proves that the topic is so cancerous in the political realm that we will most likely not see a voluntary overhaul to the system for decades to come.

2018 Predictions—The big question for market prognosticators is how much gas is left in the tank of this nearly decade long bull market? The answer to this question is predicated on a debate that has raged in economic and political circles for nearly 40 years. The Reagan administration coined the term of "trickle down economics" based on the idea that individuals are better stewards of their money than the government, and if given a lower taxation rate we will see stronger economic expansion for all.

If trickle down economics works, then our current bull market may have been refueled with enough gas to go another 2-3 years. 2013 was the last time we saw a 20+% increase in equity prices, and the following year we saw another increase of 10%. For 2018 we're looking for a similar story with expectations of low double digit returns for US stocks. However, it's unlikely we go a second straight year with ultra low volatility, so it would be reasonable to expect a 5-10% correction sometime during the year.

For a second straight year, our baseline expectation is for two more Fed interest rates hikes for an annual increase of 0.5%. The reason for these increases will be continued domestic economic expansion and GDP growth of between 3-3.5% for 2018. The wild card may be the new leadership beginning in February when current Chairmen Yellen steps down and is replaced by Trump nominee, Jerome Powell. Mr. Powell according to most pundits is expected to maintain a similar style of operation and interest rate trajectory to his predecessor, but we really don't have any historical data to base that on.

Finally, it wouldn't be fun unless we made an outlandish prediction on the value of Bitcoin. We've seen others make predictions from $0 all the way up to $1 million. About 0.1% of the world population has a meaningful holding in Bitcoin, but the way it has been covered in 2017 you'd think that number was 25% or higher.

While we are not bearish on the future of the block chain technology that Bitcoin was built on, we are less bullish on the forward case of Bitcoin and other non-governmental issued cyber currencies. Followers of Bitcoin may remember the collapse of one of their major exchanges in 2014, Mt. Gox. Our 2018 outlook for Bitcoin is negative, and we are expecting to see another major exchange failure commensurate with what was seen in 2014. If any newly minted Bitcoin millionaires are out there reading this, don't quit your day job just yet.