Who wants to be a millionaire? Everyone of course, except for those 2,000 or so billionaires. How do you become a millionaire is a much better question, and there is a lot of misinformation and bad assumptions made on the subject. There are many people that think you need to be the CEO of a Fortune 500 company or a trust fund baby in order to be a millionaire, but is that true?

Over the past decade we have seen an influx of research done on the "millionaire class" which has given us much greater insights into how people reach this status. According to recent figures there are estimated to be over 11 million households in the United States with a net worth greater than $1 million, and around 10% of that subset is over $5 million in net worth. To put those numbers in perspective, if you just took the high net worth individuals over $5 million you would have a population the size of Hawaii which is the 12th most populous state.

One out of nine households in the U.S. are millionaires. So, how exactly are these people making their money? Ramsey Solutions recently completed a national survey of over 10,000 millionaire households, and the findings are quite interesting. When you look at the top five careers for millionaires, only 15% work in senior leadership or C-suite roles. The top three professions are actually engineers, accountants, and (be ready for your jaw to drop) teachers. What is also surprising is that 1/3 of millionaires never made over $100k in a single year in their entire career. 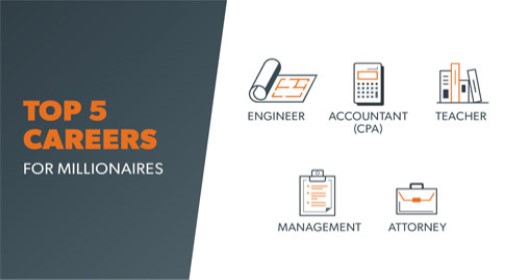 It appears a lot of people are becoming millionaires working in very traditional jobs. For those naysayers of capitalism, I know where your thoughts are going from here. All of these people must be earning their money the old fashioned way—Inheritance! According to the Ramsey Solutions study, this could not be anything further from the truth. Only 1/5 of millionaires became so via inheritance.

Pursuant to the data it appears that becoming a millionaire is within anyone's grasp as long as you're willing to work for it. For those that are willing to consistently save, the average amount of work needed to become a millionaire was 28 years, which occurred on average by around age 50.

One question many people ask before entering careers is should I work for the private or public sector? The traditional thought is that if you want to make more money you should always be in the private sector, but after a few decades of stagnant wage growth in the private sector this is no longer true. Based on the 2017 Census Personal Income Tables (PINC-07) the median earnings for those in the private sector was $46,797, and for government employees it was 14% higher at $53,435. If you carve out Federal employees their pay is a whopping 41% higher than the median coming in at $66,028.

Looking over the Ramsey study one can't help but notice a resounding trend in the spending patterns of the wealthy. The initial thought of many is that the rich are out there spending lavishly, but really the complete opposite is true. For example, when you look at the vehicle purchases of millionaires nearly 1/3 are driving either a Toyota or Honda, and only about 1/4 are driving brands considered traditionally as "luxury" vehicles.


The frugal nature of millionaires also extends from their garage to the rest of their house. According to the Ramsey data the average size of a millionaire's house was a reasonable 2600 square feet. One might think this number is skewed by a large amount of millionaires living in big cities where living quarters are naturally smaller, but this is not the case either. Only around 1/5 of millionaires live in large metropolitan areas and 63% opt to live in the more reasonably priced suburban residential areas. 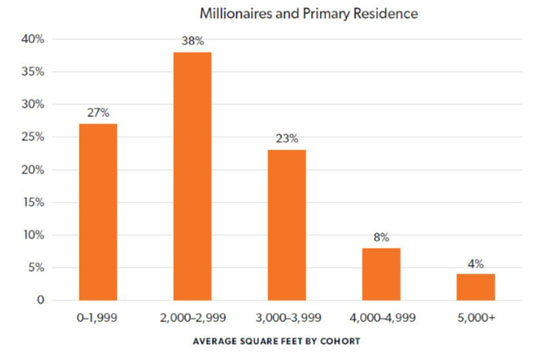 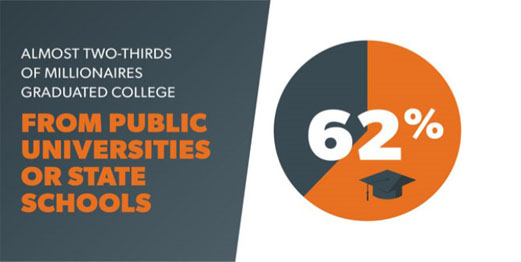 It would appear the secret to becoming a millionaire is more about how you spend your money instead of how you make it. For those looking to ascend to this level of wealth it is extremely important to understand and control your family budget. Debt should also be avoided for the bulk of purchases outside of a primary residence. If you work hard, spend responsibly, and save consistently, becoming a millionaire is going to be a certainty, not an impossibility.