"If you don't read the newspaper, you're uninformed. If you read the newspaper, you're mis-informed." This is a quote from Mark Twain, and it is just as apropos today as it was over a century ago. There is a deluge of information in the world today, and it really would be difficult to completely ignore it without living under a rock. Sadly, if you try to keep up with current events you may end up wishing you had stayed under that rock.

Most likely you have heard the term "fake news." Regardless of your news source, you're almost certain to have heard your media of choice call one (or all) of its competitors fake. So, it is a perfectly valid question to ask: Is there a single dependable source of news in the United States today? Due to the ever changing business model of media over the past decade, I believe the answer is no.

With the slow demise of print media over the 21st century, much of the media's business model has changed over to the "click bait" scheme. Even reputable news sources frequently post fairly outlandish headlines or editorials in order to bring in traffic to their website. The local news has abided by the rule of "if it bleeds it leads" for decades, and now that philosophy has bled over to the rest of the media.

Why the heck am I talking about political science in a financial newsletter? The reason for that is because the click bait business model has now found itself heavily embedded into financial news. 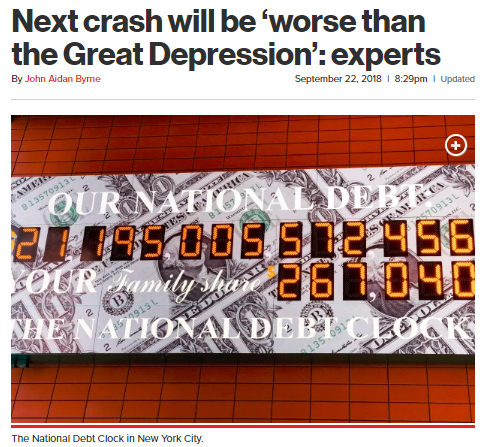 For the past ten years I can't remember a week that has gone by without seeing at least one article predicting a 50-80% crash in the stock market. Just over the past week I can recall headlines stating we are in a tech bubble bigger than the dotcom boom and another referencing the "Hindenburg Omen," which is a little known technical analysis theory predicting imminent market collapse.

Staying abreast of financial news in order to manage money is hard, and this type of news coverage makes a hard task even more difficult. After all, the biggest single key to successful investing is staying in for the long haul. That becomes a daunting task when investors are bombarded on a daily basis with "experts" predicting imminent doom and suggesting investors buy gold bars.

I must point out that painful market corrections can and will happen. Large bear market corrections occur about every 5 years on average. This realization is why long term investing can be so difficult. However, unless an investor has a compelling reason to not be invested, it would be wise to stay in the markets; otherwise, you are fighting odds that are against you. Most importantly, if you choose to fight against these odds make sure you have a strategy to eventually reinvest in case you are wrong and your bear market thesis turns into fake news.