All is Fair in Love and Trade War

Star Wars fans endured a 16 year lull in between the end of the original trilogy and the launch of the much anticipated prequel films. What were fans rewarded with after all that time? For all their anticipation all they got in return was one of the most hated and mocked films of all time. And, at the center of the story line, Intergalactic trade.

In short, it is REALLY boring to talk about the finer details of trade. However, as you turn on the TV nowadays you'd never know this from the consistent talk of a global trade war and impending financial doom. How does an investor make heads or tails of this chatter?

First of all, take anything you hear about trade with a massive grain of salt. International trade is a centuries old system that is incredibly complex with very few people (if any) that have a significant grasp on it. Just consider the car you drive. It has around 30,000 parts, and it would be a daunting task to track down the country of origin for just a fraction of those parts. Now imagine having a firm grasp on the of the rest of the US economy's $18 trillion GDP—Good luck!

While the trade war fireworks between Donald Trump and the media are mildly entertaining to watch, the real economic story here is the meteoric rise of China from an agrarian society to an industrial power house. In just two short decades the per capita production in China increased an astonishing 1,000%, going from around $800/year to the current $8,000/year in goods and services produced per person. To put that growth into perspective, US production increased only around 75% over that same time period.

Part of the reason for China's incredible success over the past 20 years is that it was allowed to compete on the world stage essentially with training wheels on. For years China utilized a manipulated and undervalued currency and widespread industrial subsidies from the central government. 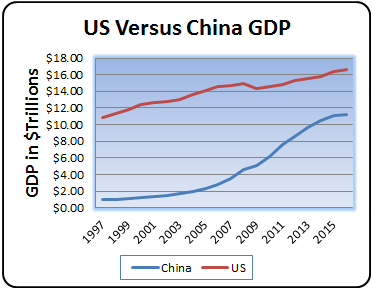 Many people, including myself, have assumed that China's success in manufacturing was based primarily on low wages. However, labor in China are far from cheap now thanks to manufacturing wages tripling in the last 10 years. So, there are clearly other factors to consider for Chinese manufacturing success.

Let's take a look at the global implications of Chinese industrial subsidies when left unabated. According to a research piece by the Alliance for American Manufacturing, it is estimated that the Chinese government gave out energy subsidies totaling about $27 billion between 2000 and 2007. About 95% of this amount was earmarked towards the coal industry (the primary ingredient of steel). U.S. consumers and the rest of the world enjoyed cheap steel and coal at the time, but there was a steep price to pay. Fast forward a decade and nearly every coal and steel producer in the U.S. filed bankruptcy between 2014-2016 due to highly depressed commodity prices. There weren't many tears shed for the death of the coal industry in the United States. It was considered an "unclean" relic of industry on the way out the door. However, the same story played out in emerging industries like solar panels and 3D printers during the past decade. Bristling young companies with profit potential were brought to their knees repeatedly by Chinese competitors dumping product at a loss, most likely thanks to back-end government subsidies.

With China's emergence onto the global stage this century, it is time for it to start playing on a level playing field with the rest of the industrialized world. This either means a substantial reduction in industrial subsidies or enduring global tariffs enforced against most of their exports.

It is almost unanimously considered that trade wars are negative for all participants in the short-run. For investors this may cause some heart burn in the months to come. However, it is my opinion that the economic changes needed in China will end up being a positive for all parties. After all, the long term elimination of dumping policies should equate into greater profits for business, and thus greater profits for your portfolio.