Has the Coronavirus Infected the Stock Market?

Last week the U.S. stock market plummeted 15% at its lows giving us the worst week since the financial crisis a decade ago. The main cause attributed to this collapse was the potential economic fallout from the new Coronavirus (COVID-19) that has put many parts of China and the world into a short-term paralysis. Last week over 99% of the companies in the S&P 500 ended up being down for the week. In addition to that, the VIX volatility index (the market's so-called "fear gauge") hit a level of 50. These are typically considered technical indicators showing extremely oversold markets. To put it into perspective, the VIX indicator was only in the 40s during March of 2009 when stock market was breaking 10-year lows. 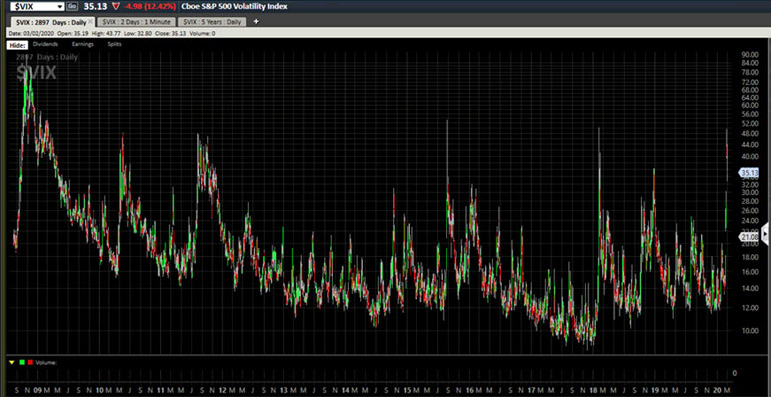 While the Coronavirus is no laughing matter and a legitimate reason for concern, in my opinion it was only part of the reason for this correction. Last year equities returned around 30% for many indexes which was an impressive showing putting us at new record highs. That momentum carried into January, and like Icarus, the markets just got too close to the sun in February. While it is easy to blame the Coronavirus, politics, or the current lunar cycle, the real reason for this market selloff was a case of irrational exuberance as Alan Greenspan would say. In the past month we saw Tesla triple in value becoming more valuable than all the other US auto manufacturers combined. In addition, the big tech companies in the NASDAQ added on $100's of billions in market capitalization this year alone. These are the hallmark tells of a market that is overbought and ready for punishment.

Now that investors have been sobered up after a 15% hit last week, it is time to see if the Coronavirus has the potential to hamstring the global economy. In February the spread of the disease became an extremely serious concern as the contagion of it went geometric making it seem as if the virus might be unstoppable. Complicating matters futher, the death rate in China from the disease was 2-3% which put it on par with the 1918 flu pandemic that killed approximately 50 million worldwide.

The initial numbers coming out of China for this virus were absolutely frightening. The newness of the virus and the high population density present in China possibly gave the illusion that the world was in route to disaster. Then the spread slowed… at least if you believe the figures reported in China. After essentially shutting down their economy for the past several weeks the active cases in the country has stayed at around 80,000. Lauren Gardner at Johns Hopkins has an informative tool for mapping the virus.

According to their tool the spread of the virus has flat lined over the past two weeks. While the disease has clearly escaped mainland China and afflicted dozens of other countries, it doesn't seem to have the same punch as it did in Wuhan. For example, South Korea has reported over 4,000 cases, but only 28 deaths putting the mortality rate there at under 1%. To put that in perspective, about 50 people die from the flu in the US on average every day, so this new threat may not be much more of a world event than just an aggressive flu season.

If you believe the worst of this pandemic was at ground zero in China, then the worst of the economic hit has most likely already passed. This impact was significant in China and likely will shutter their economic growth to zero for 2020 as Goldman Sachs predicted last week. Expectations were for 6% growth there, so stopping factories for several weeks is almost certain to eliminate any growth for the year. Here in the US we are looking at a much more muted economic response. Over the next couple of months expect some backlogs in products that have supply chains based in China. There will also be an extra bit of caution practiced by many who will skip public events and travel.

At the start of the year we published an expectation for a 2.5% growth in GDP in the US, and we expect this disruption to lower that to closer to 2.0%. Markets also slumped in early 2003 amid an outbreak of severe acute respiratory syndrome, or SARS (also a form of "corona" virus, but inherently much more deadly with a 10%+ mortality rate.) That sell-off lasted a few months and accounted for roughly a 15% drop before returning to the positive less than 6 months later. No new cases of SARS have materialized since 2004, and this furthers the notion that this may not be an epidemic but just a temporary phenomenon. Last week's market panic has dropped the 10-year treasury to all-time lows which might be one of the more impactful events from the sell-off. With new lower interest rates and a possible Fed rate cut on the horizon, one might expect for the markets to be back off to the races should the Coronavirus not spread aggressively just like other would be pandemics from the past two decades.