Hindsight is always 2020, and 2020 was an odd year by any standard. We endured a global pandemic, an intense bear market crash, a quarterly GDP drop of 31%, and somehow the S&P 500 stock index closed 16% higher than where it started. We managed all that while simultaneously playing a year-long Easter egg hunt for toilet paper. Will the new year bring back an abundancy of paper products and "normal" market action? Or, are we destined for another year of extremes?

Before we jump into our 2021 outlook, let's first see how our 2020 predictions turned out. The year started off much like 2019 left off. The U.S stock market was up big (33%) in 2019, and our target for 2020 year-end market returns was a gain of around 10%. The first few weeks of 2020 continued that upward trend, gaining another 5%, and our projection seemed cautious. In spite of continued noise over the trade war with China, an imminent Presidential election cycle, and lofty valuations for many stocks, all seemed well. The market continued to be driven by the specter of the Federal Reserve (Fed) keeping interest rates low and prolonging the decade long rally...until March. Then, the bottom fell out of the stock market and the economy as fear over the consequences of the COVID-19 pandemic gripped just about every asset class. At that point, our yearly predictions weren't looking too good, but shockingly, by the end of the year a lot of our predictions came to fruition. 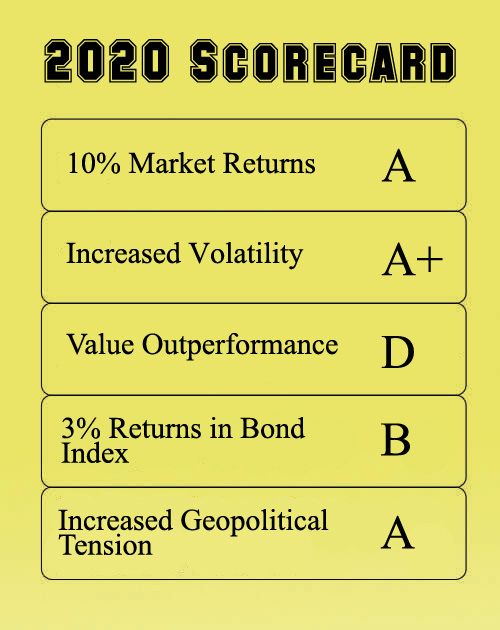 One of our most prescient calls was for increased volatility with the potential for multiple pullbacks due to geopolitical tension and the uncertainty of the wide open election season. We even suggested taking profits at the start of the year if you were in need of cash, and we also suggested precious metals may outperform in the face of volatility. To that end, gold had one of its best years in a long time with a return of 22%. The Volatility Index (VIX), which is often referred to as the market's fear gauge, more than quadrupled and hit a level of 80, which was equal to that of the Great Recession crash in 2008. Sadly, this turned out to be one of the most accurate predictions we've made in the 13 years of writing this newsletter.

We weren't quite as accurate with our interest rate predictions for the year. We thought rates would most likely stay flat due to the Fed wanting to appear apolitical in an election year. Of course, this ideal went out the window during the pandemic when the central bank was forced to implement all kinds of monetary stimulus to keep the economy afloat and markets stabilized. As the pandemic unfolded, the Fed announced massive cuts to interest rates, bringing them effectively to 0%, and started large scale asset purchases of mortgages, Treasuries, and even corporate bonds. This served to flatten the yield curve and make our prediction of around a 3% returns in bonds much too modest. The aggregate bond index closed the year up 7.5%.

Our least accurate prediction was a call for value to outperform growth. After nearly a decade of growth company stock outperformance, we felt like it was finally time for a shift in sentiment due to lofty valuations. While we will never know how things might have been different if the pandemic didn't happen, we can't change the 2020 outcomes. In fact, growth companies led by big technology stocks were able to benefit in an environment where lockdowns and work from home became the new themes. The Nasdaq, which is predominantly tech stocks, was up 45% for the year while many traditional value names and sectors suffered.

Predictions—We've said this before, but interest rates have been a key driver of many of our predictions for the past decade, and they've consistently been the best market barometer we have to work with. 2021 is no different, and we expect that the Fed will keep their word and not raise interest rates for the foreseeable future so as not to forestall our economic recovery. On its surface, keeping rates unchanged doesn't sound like a driver of market returns, but it can have profound implications. As the pandemic and bear market progressed in March and April, investors liquated large amounts of equities, and that cash flowed into the safety of money market funds and caused them to double to around $4 Trillion. Much of this money was slow to reverse back into the markets until after the November election. We suspect that it continues to trickle out of money market funds for the next 6 to 12 months as the economy regains its footing. With cash earning nothing and bonds paying very little interest, investors will likely choose equities over the latter two. Dividend yields and the potential for growth give stocks an advantage, and for this reason, we expect the markets to climb another 10% from the start of the year. Historically, it is somewhat rare for three straight years of double digit gains, but it is also rare to have 0% interest rates that continue to encourage the purchase of risk assets to avoid the erosion of purchasing power.

The other major backdrop for 2021 is going to be VERY favorable economic comparisons. While Wall Street and Main Street may have had one of the greatest divergences in outcomes ever in 2020, we expect the two will converge this year. As the vaccine rollout ramps up and the economy re-opens, we expect pent up demand to drive year-end GDP growth of around 5% for the first time since the US posted 4.75% gains in 1999. While this is largely window dressing since we are starting from a much lower base GDP due to the pandemic inspired recession, it is still historically a positive talking point and catalyst. Some of the biggest beneficiaries of this could be those beat-up value stocks like financials, travel and leisure, and energy at the expense of some of the big tech firms that had pretty stellar results in 2020 and much more difficult sales comparisons. On a similar note, with the Fed on hold and the economy heating up, it's not unreasonable to assume that inflation could start to creep in. This is typically good for equities and commodities, but very bad for bonds. Don't be surprised to see bonds post negative returns in 2021 if this goldilocks scenario plays out.

If you're looking for an investment thesis based off US election results, there are a lot to pick from. At this time, we still don't know which party will control the US Senate, but even after the results come in from the Georgia runoff races on January 5th, we believe there are a few themes to play regardless of the outcome. First, the Trump administration will go down as having some of the most anti-globalistic policies in modern history. Based off the track record of the Obama administration, it would seem likely that Biden reverses course on many of Trump's trade policies and newly enforced tariffs. These policy changes in tandem with the continued weakening dollar could create a backdrop for international equities to finally have their day in the sun again. US equities have nearly doubled the performance of their international counterparts over the past 5 years, so this leaves international valuations looking more reasonable. Second, some form of additional stimulus seems imminent. The CARES Act of last year offered numerous payouts to individuals and businesses suffering from unemployment and dire economic consequences. These direct payments and other programs such as the PPP helped keep small businesses and people afloat, and propel the stock market higher from it's bottom. The newest relief bill is set to send out payments to households in early 2021, and like the last round of payments, there is a great likelihood that some of these proceeds make their way into the stock market further inflating the bubble in some of the more speculative names. There is an entire generation of investors now who weren't around for the painful lessons of tech boom and subsequent bust in 2000, but we'd imagine they will get their education within the next year or two. 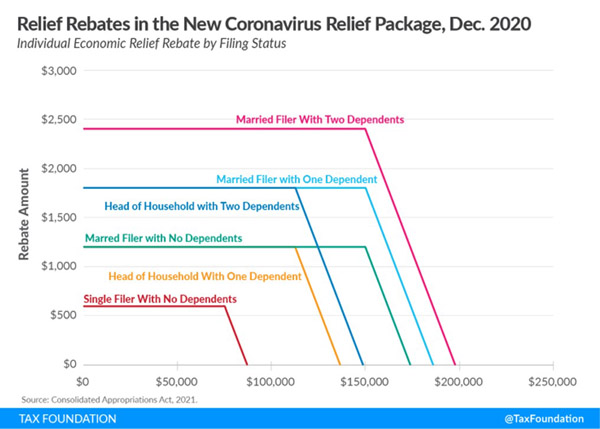 Professional and amateur investors alike should remember the lessons taught to us in 2020 by the markets. During selloffs, the easy thing in the moment is to panic and sell everything in your account. However, once you get 6 months down the road, rarely do you find that you made the right decision in the middle of all that stress and volatility. Remember that when you see everyone running for the exits, sometimes the smartest thing to do is to go against the current and wade right in. There were a lot of things in 2020 that didn't feel good, and one of the hardest things to do back in April was to place buy orders for stocks. The only thing that was harder was placing buy orders for toilet paper at Harris Teeter.