"Is Crypto Here to Stay?"

We wrote our first newsletter article on cryptocurrency in July 2014. At the time, the only real digital coin to speak of was Bitcoin, and it was trading at $600 per coin. Bitcoin was also in the midst of a major selloff, dropping 50% from it’s previous highs. Fast forward to the present and Bitcoin is now worth over $30,000 per coin, and yet again is down around 50% from previous highs. So, other than Bitcoin being worth 50x more than when we wrote about it 7 years ago, what exactly has changed in the cryptocurrency space over this time frame?

The biggest change in my opinion is that when you talk about cryptocurrency now, you aren’t necessarily just talking about Bitcoin anymore. While Bitcoin is still the biggest kid on the block at nearly $1 trillion market cap, there are now over 4,000 different cryptocurrencies! In fact, someone with minimal programming knowledge can start a new coin in less than an hour with some basic cutting and pasting from the code of other coins. 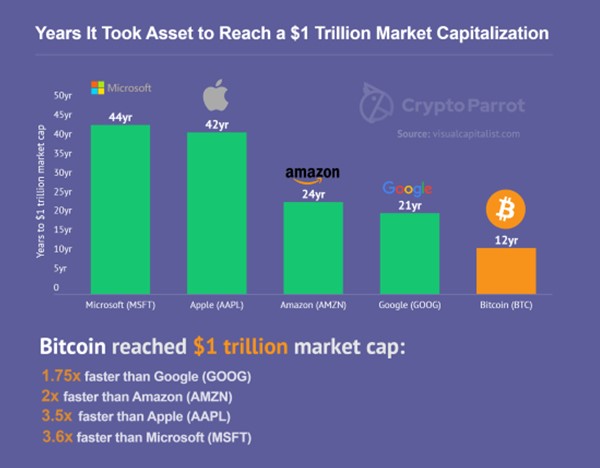 One thing that hasn’t changed for cryptocurrency in seven years is its overall adoption rate in the global economy. In fact, I suspect the next time we write about this subject we won’t even be using the term “currency” with crypto anymore. In our first article we mentioned that Overstock, Dish Network, and Zynga were accepting Bitcoin as payment. Since then, very few other major corporations have followed suit. Tesla, one of the few large corporations to begin accepting Bitcoin payment earlier this year, reversed course shortly afterwards under the guise that the energy consumption during Bitcoin mining is bad for the environment.

Perhaps the real reason that Tesla reversed course on accepting Bitcoin as payment is because it is a terrible currency. For a currency to be successful there is a requirement of relative stability. If you are paying for a candy bar at the grocery store this aspect does not really affect either party because you are receiving your goods and making payment simultaneously. However, for a transaction such as custom ordering a vehicle that you won’t receive for 6-12 months, you need to have a stable medium of value over that time period. This is where crypto's utility as a currency has utterly failed in my opinion. Bitcoin (and all other cryptos) have been extremely volatile over their entire existence. Just looking at this year alone Bitcoin tripled in value and then lost 50% of its market cap over the course of two weeks. For someone looking to contract for goods or services over the course of several weeks or even years, using cryptocurrency as a medium of exchange is an impossibility. As an example, say you were paying one Bitcoin for a new Tesla you’ll receive in 6 months. Is that going to be the equivalent of $10,000 or $100,000? Honestly, no one knows, and it is practically guaranteed one of the parties is going to be extremely dissatisfied at the end of the transaction. Obviously, those who have speculated in crypto have been pretty happy with the results up to now, but just because something has grown in value does not equate it to a currency. 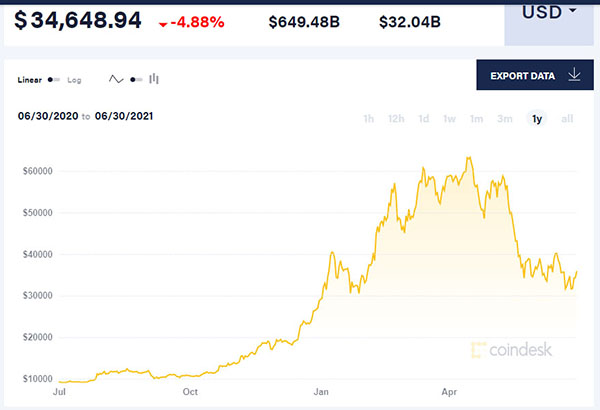 We maintain that the real value of crypto is behind blockchain technology and the use of decentralized public ledgers. Of the new coins on the market, the one that has given Bitcoin the biggest run for its digital money is Ethereum. Launched as an open-source blockchain project in 2015, Ethereum has climbed to being the second most valuable cryptocurrency in the world. The reason for this is that Ethereum was billed not just as a currency, but also as a programming platform. Other developers are able to create decentralized applications that interact with Ethereum.

To date, the applications that have gotten the most press are non-fungible tokens (NFTs). You’ve probably seen where some NFTs in the digital art world have sold for ungodly sums of money. The record so far was $69 million in Ethereum that went to the artist Beeple. The official owner of these pieces of art are kept on the Ethereum blockchain which theoretically prevents fraud and forgeries that have plagued the art community for centuries.

For crypto to move forward from here there needs to be some utility outside of the esoteric digital art world. How might every day people and businesses use it? As I researched the different problems developers are using crypto to solve, it started to feel a lot like the dotcom boom of the 1990’s. Computer programmers were using the internet and websites to create solutions for everything imaginable. While obviously a lot of major companies came out of this such as Amazon, Google, and Facebook, there are hundreds of failed corporations and ideas for every one that was successful. I’m guessing you haven’t done a web search on Lycos or Ask Jeeves in quite some time.

Herein lies the danger for the average investor who is trying to make it big in crypto. Most coins are going to be worthless in the next 5 to 10 years. It is also possible that a small investment in the right coin could make you millions of dollars, and I suppose this is the allure for the general public.

Dogecoin, which is now a top ten coin by total value will probably end up a great lesson in the dangers of investing in crypto. It was admittedly started as a joke by the founder who says he spent two hours creating it. The “meme-coin” found fame earlier this year amidst the Gamestop craze and saw its value skyrocket over 100 times in the course of four short months. However, If you came late to the party you were a sad puppy and potentially lost 75% on your investment just two months later.

How does the average investor get involved with crypto? In my opinion they shouldn’t. I drew a comparison to the dotcom boom of the 1990’s earlier, and I suspect the boom in crypto ends in a similar and grandiose collapse in value for the entire sector. However, if you do decide to invest in crypto, think of it not as a currency, but as a speculative digital asset. It may not provide the store of value or protection against inflation that traditional alternative assets do, but if you treat it accordingly you can avoid some of the pitfalls that doomed many investors during the dotcom bust. Here are a few other tips to keep in mind:

1) Keep your initial investment small relative to your net worth.
2) Use a reputable exchange for your coin purchases that allows you to transfer coins outside of their ecosystem.
3) Consider holding your coins directly in a digital wallet. Crypto exchanges have failed in the past and certainly will again in the future.
4) Buy a coin that has a realistic chance at having future utility (Sorry Dogecoin).
5) Buckle up—when crypto sells off it goes down 50-90%, so just try to enjoy the ride!