The Federal Reserve Bank (Fed) was established by Congress in 1913. The original act was amended in 1977 as a result of the events of the 1970s, a decade that brought simultaneous high inflation and unemployment, known as “stagflation.” Shaped by the economic scars of that time period, Congress explicitly stated that the Fed’s goal henceforth should be to maintain maximum employment and stable prices with moderate long-term interest rates. In this dual mandate, maximum employment doesn't mean 100%, which is not possible, but rather the level of employment that is likely in normal economic conditions. Stable prices and moderate long-term interest rates can be viewed as one mandate, since long-term interest rates are set with an eye to managing pricing pressure and inflation.

Ever since, the Fed has been trying to thread the needle and foster an economic environment with a goldilocks inflation pegged at 2-3%. The rationale is that when households and businesses can reasonably expect inflation to remain low and stable, they are able to make sound decisions regarding saving, borrowing, and investment. These all contribute to a well-functioning economy. If inflation runs too hot or too cold for long periods of time, then we start to see all sorts of severe economic distortions. Guess what? We are getting there now!

The Consumer Price Index (CPI) measures the average price of a basket of consumer goods and services, and it has spiked up 5.3% over the last 12 months. The Social Security Administration uses the CPI as a measure to adjust its distributions annually, and it expects that 2022 payments will increase by 6.2%! If you have filled up a tank of gas, shopped at the grocery store, or even looked up the value of your home on Zillow, you know that all these estimates are significantly lower than the actual inflation persistent in the marketplace. The Fed has stated many times they it is “data dependent,” and it makes key decisions on the adjustment of interest rates based on this data. The problem with that strategy is statistics can be manipulated or misconstrued. For example, the annual table to the right taken from Wikipedia shows the components that make up the CPI and Personal Consumption Expenditure (PCE) index. The latter of these is the Fed’s preferred barometer. 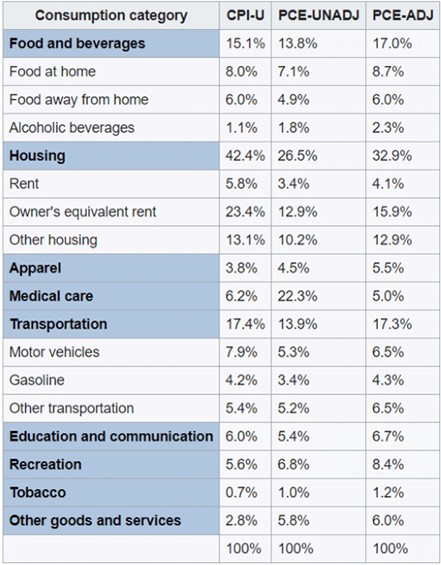 You’ll note that the largest component is Housing. However, you do not “consume” housing if you own a house, but rather you invest in it. So, economists came up with the term Owner Equivalent Rent (OER) that supposedly represents that segment. Basically, they do a phone survey and ask owners how much they would charge someone to rent their house if they didn’t live in it. That’s obviously pretty subjective, and likely inaccurate (the latest data point was up only 2.5%). Stand alone rent also seems to be measured unreliably. In the graph below, there is a huge dislocation between the index calculation and what is being observed in the marketplace. With expiring rent moratoriums, don’t be surprised if these data components spike up further in the coming months. 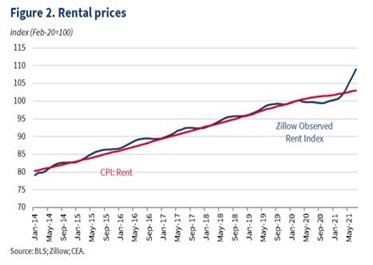 The Fed has acknowledged that current inflation is higher than the long-term goal, but it also has decided that current rates are “transitory” in nature rather than “persistent.” Fed Chairman, Jerome Powell, has attributed much of the dynamic to the economic supply and demand inefficiencies brought about by the Covid Pandemic. That may at least be partially true. However, the Fed also soon may have to acknowledge that we may have a more structural inflation problem. If that’s the case, the soaring prices of consumer goods and services will only be exacerbated further by the Fed flooding the system with liquidity and artificially keeping interest rates low. Maybe it’s time to hit the brakes on all this monetary stimulus ala former Fed Chair Paul Volcker in the 1980s. Will Chair Powell or whoever else is nominated for his job come February have the political will to make these hard decisions? Stay tuned.