At this time last year, optimism was in short supply, and fear controlled our lives and our investments. The U.S. stock market had just undergone one of the swiftest corrections in recorded history, leaving the indices 35% below their high-water mark. Covid-19 became the only story and the only investment theme that mattered. In our article entitled “March Sadness,” we alluded to the historic short-term pain but also the potential upside in the long-term from the government fiscal stimulus as well as monetary stimulus from the Federal Reserve. These actions “greased the wheels significantly” to provide liquidity and stability to the markets. As it stands one year later, the economy does appear to be regaining its footing, and we have reached an inflection point in fighting the virus. Thanks to the collective genius of those involved in developing, testing, distributing, and administering multiple vaccines, the narrative has now changed from “if” to “when” things will return to normalcy. Not surprisingly, investors that exhibited patience rather than fear have been rewarded with stellar returns. Since the bottom on March 23, 2020, the S&P 500 is now up close to 75% one year later. Some of that is, of course, making up for lost ground, but the fact that financial markets have been so sanguine in the face of repeated economic hardships and gone to new highs is still remarkable. In fact, some might argue that stock prices and valuations have grown so fast that we are entering bubble territory akin to 2000. As we ponder that notion, let’s dive into the top investment themes so far in 2021 and see which one is likely to have the most impact for the rest of the year.

Coming out of the East, we have a Cinderella story that is making its first appearance in our bracket. What has affectionately been donned as “meme stocks” or “stonks” are companies favored by millennial-aged retail traders that trade on hype more so than fundamentals. Many of these stocks have become battlegrounds for the little guy versus hedge funds in a long versus short debate. This fascinating battle has brought notoriety and even congressional testimony from the likes of the now infamous Reddit/WallStreetBets trader “Roaring Kitty.” While it makes sense that people stuck at home with government stimulus checks in their pocket and a “free” trading platform such as Robinhood at their fingertips might dabble in the stock market, we have never seen such coordination that leads to self-fulfilling prophecies before. Early movers buy into a stock such as GameStop and tout it to others online, only to have more cascade in for fear of missing out. Sometimes David does in fact defeat Goliath, but as we have seen already with some breathtaking collapses in these meme stocks, intrinsic value will ultimately drive out the weak hands and the bubble will pop.

In the South region, we have the return of one of our tournament blue bloods. The Federal Reserve (Fed) led by Coach Jerome Powell is once again a powerhouse program throwing around their weight to affect the outcome of the game. By lowering interest rates to zero at the onset of the pandemic and reviving the quantitative easing defensive strategy, the Fed has quite literally forced its opponents to throw up bricks. This monetary stimulus has driven the 10-year treasury yield (which is used to benchmark mortgage rates) to an all-time low and has incentivized home purchases and new construction at a historical rate. As we wrote last quarter in our 2021 predictions, interest rates have been the predominant factor in successfully predicting market movements in recent history, and this time appears no different. With the Fed promising to keep rates in check until at least 2023 or until full employment and inflation exceeds 2% annually, it’s a pretty safe bet that Coach Powell will continue to be influential up until his term ends in February 2022.

Hailing from the Mid-west region, we have the Blue Wave (no relation to the Tulane Green Wave mascot). Led by President Biden, who returns to the dance after a stint as an assistant coach, the Democrats now control both the White House and Congress and have changed the playbook completely from the prior administration. While some might think their defense is a bit porous, there is no doubt that their offense is firing on all cylinders. With a narrow margin, Congress passed the American Rescue Plan on March 11th, unleashing a historic $1.9 trillion fiscal stimulus. This economic relief program is designed to aid many aspects of the country still struggling with the effects of Covid-19 and has already created waves in the financial markets. While the stock market has thus far responded favorably to the stimulus, the bond market has not taken the news in stride. Yields on government bonds have shot up quickly, and some may be wondering if the Blue Wave still has enough gas in the tank to close out the second half with an infrastructure bill and a corresponding tax increase.

Finally, out of the West region we have the coronavirus (Covid-19). As I mentioned earlier, last year Covid-19 was the only story. This year, unfortunately, it is still big, but it’s not the only story driving market performance. In fact, the story in 2021 is more about what will happen once Covid-19 is gone or is brought to a more manageable level. On that front, we have seen a resurgence of stocks that are part of the “re-opening” trade. These distressed companies such as those in travel & leisure, restaurants, energy, and financials were the most affected by the lockdowns and economic deterioration in 2020. Consequently, they stand to benefit the most from a return to normalcy. On the flip side, the “work from home” stocks that mostly favored the technology sector greatly out-performed in 2020 but have struggled thus far in 2021. We pointed out this likely shift from growth to value in our last newsletter, and it seems to be playing out accordingly. Furthering this sentiment is the aforementioned rise in interest rates. For those that still pay attention to fundamentals and valuation, rising interest rates are typically bad for the more speculative companies that don’t have earnings now but project to have them in the future. The market alters its discount rate appropriately, and they look less attractive. 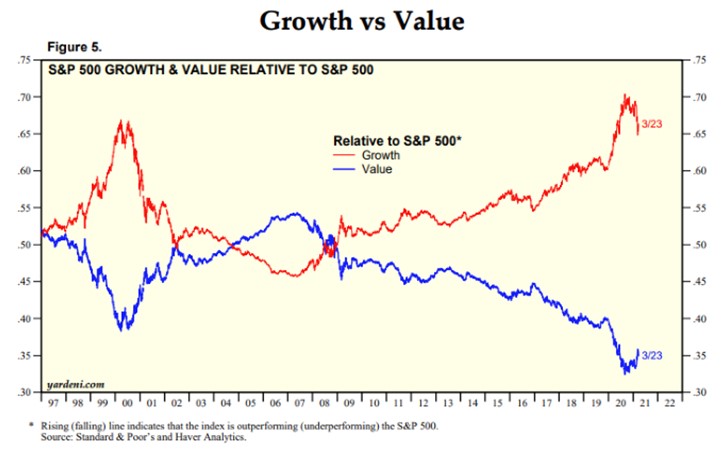 We previously noted that the Fed is on record stating that they will hold interest rates low in the near-term, but the market is implying that the Fed might not be able to keep inflation at bay. This could be a good thing in the short-term as the re-opening of the economy is predicted to lead to GDP growth of 5-6% in 2021. However, that is versus an easier comparison to a terrible economic statistic in 2020. What really matters for the investment community is figuring out if the economy and companies continue upward momentum in 2022. It’s too soon to tell, but perhaps the re-orientation of the economy due to Covid-19 may aid in that pursuit. Many companies got leaner to survive and became more efficient through the adoption of technological advances that likely sped up their growth potential. This should translate to higher gross margins as the economy grows and revenues increase.

Which of these final four will ultimately cut down the nets? As of the first quarter, the dominant investment theme for the year is still up in the air. As long as we keep Covid-19 from repeating its title from last year, we can all breathe a sigh of relief and be a bit more optimistic. However, the prudent investor shouldn’t necessarily let their guard down. Should the markets stay hot, we might be swapping our 2020 quarantine bubble for a 2021 stock market bubble.